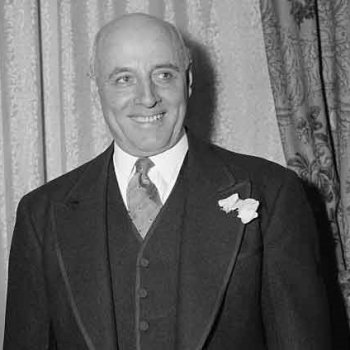 Andrew May represented the state of Kentucky in the U.S. House of Representatives from 1931-1947. This, of course, included the entirety of World War II. As the chairman of the House Military Affairs Committee, May regularly received classified information about the progress of the war, to include our enemy’s strengths and weaknesses.

At that point in the war, US submarines had been conducting a very successful undersea war against Japan, inflicting heavy casualties while receiving relatively few losses in exchange. The Japanese depth charges simply weren’t effective against US submarines.

When asked about this fact in a press conference after his return from the war zone in 1943, May explained that American submarines had a higher survival rate because the Japanese depth charges were fused to explode at too-shallow a depth. This statement was picked up by multiple press associations and published all over the country.

Shortly after, Japanese forces adjusted their depth charges to explode at a greater depth than they had been before. According to Vice Admiral Charles A. Lockwood, the commander of the U.S. submarine fleet in the Pacific Theater, that disclosure close the Navy up to ten submarines and 800 men. Said, Lockwood, “I hear Congressman May said the [Japanese] depth charges are not set deep enough. He would be pleased to know that the [Japanese] set them deeper now.”

After the war, May was tried and convicted for war profiteering after it was discovered that he was receiving bribes from a munitions company that produced substandard mortar shells. As a result of the military contracts that May helped them obtain, 38 American Soldiers were killed. For his role, May served nine months in federal prison. After a presidential pardon, he was unable to revive his political career and practiced law in his hometown until his death in 1959.

It must be noted that some historians dispute the account of the so-called “May incident” and the only record appears to be second-hand. Whether it’s true or apocryphal, the story itself still serves as a sound reminder of why OPSEC is important.