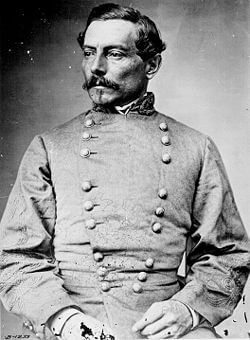 In the US Civil War, the Confederate Forces under P.G.T. Beauregard found themselves severely outnumbered at Corinth in May of 1862. Maj. Gen. Henry W. Hallecks’s army laid siege to their position with an overwhelming force of 100,000 men. However, upon reaching the Beauregard’s fortifications, Halleck was struck by the apparent strength of the garrison forces. Camping for the night in order to consider strategy, he was concerned about the possibility of attacking a fortification with his own inferior numbers.

His concern was compounded when one of his commanders on the left flank of the position wrote that “The enemy is re-enforcing heavily, by trains, in my front and on my left. The cars are running constantly, and the cheering is immense every time they unload in front of me. I have no doubt, from all appearances, that I shall be attacked in heavy force at daylight.” Similarly ominous were the imposing silhouettes of the Confederate artillerists standing by their guns, backlit by the many campfires.

It wasn’t until the next morning that it was discovered that Beauregard’s entire army, consisting of only 50,000 men, had retreated during the night. The retreat was orderly and methodical, and was masked by a train running back and forth along the Memphis & Charleston tracks, while the men cheered and played taps (the single band shifted from location to location during the night). To complete the illusion, fires were kept burning by a small group of men until morning, drummers were left to beat the reveille and stuffed dummies bravely manned the guns with painted on grins.

The Federal forces were prevented from comprehending the true intentions of the Confederate forces because key information was denied to them. In addition, Deception (often found hand in hand with OPSEC) was successfully used to mask the operation.