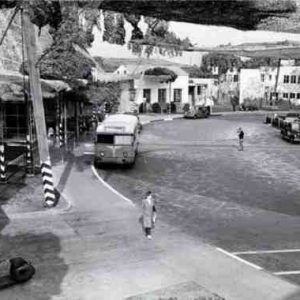 The raid on Pearl Harbor in December of 1941 effectively brought the US into World War II, and naturally led to the increase of wartime production on the mainland. The Burbank, California Lockheed Martin Aircraft Plant, however, had a significant concern: If enemy fighters could reach Hawaii, they very well may be able to reach the US mainland, which would leave a Military production facility on the West Coast vulnerable to potential attack or aerial observation.

Fortunately, The Lockheed Martin plant had a neighbor that was well-versed in making magic- Walt Disney Studios.

A team of 700 soldiers, and countless Disney Techs, descended on the plant with the goal of making 550 acres of the plant disappear. Canvas-covered chicken wire was stretched over 17 hangars and 28 other critical buildings, to include the Burbank airport terminal, parking lots and manufacturing facilities. The camouflage was hand-painted to resemble a subdivision and agricultural community, complete with roads, fields of flowers and grain, orchards and farmland. Trees were carefully simulated, and workers were drafted to simulate daily life, including moving parked cars and hanging morning wash in “back yards.”

No detail was spared in order to make the facility appear authentic, down to the air ducts disguised as fire hydrants. And in fact, the ruse was never reportedly detected by axis forces. Meanwhile, below the appearance of a serene and harmless countryside, the facility continued their brisk production schedule. The subterfuge, in fact, was so successful, that Boeing duplicated it in their Seattle plant with a burlap and chicken wire lawn scene over the rooftops.

While modern technology would negate such a scheme today, deception will continue to play a role in warfare, business and even home safety, conventional wisdom will always remind us- things aren’t always what they appear.