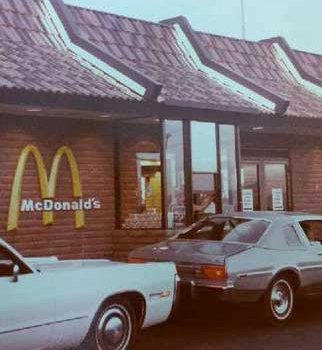 Although McDonald’s wasn’t the first fast food chain to have a drive-through (that honor goes to Red’s Hamburg along Route 66 in Springfield, Mo, who opened their drive-through in 1947), it’s hard to picture the golden arches without a line of cars snaking around the side. In fact, the majority of McDonald’s diners get their food this way.

But this wasn’t always the case. McDonald’s didn’t open its first drive-through restaurant until 1975, when Sierra Vista restaurant owner David Rich learned that soldiers from nearby Fort Huachuca weren’t able to come into the dining area while in uniform. This was due partially to military decorum, but it was also a security consideration that’s still enforced in many commands today.

Seeing that customers were driving by rather than stopping in, Rich remodeled the location to add a drive-through feature. This proved to be very popular with the soldiers at Huachuca, with other locations following suit soon after.

So the next time you get a Big Mac and fries from the drive-through window, consider how OPSEC played a role in your meal!